Uría Menéndez, law firm of the year in Spain

Uría Menéndez has been named “Law Firm of the Year: Spain” in the Chambers Europe Awards.

Last Friday, Uría Menéndez received the prestigious award of Law Firm of the Year:Spain from the British publication Chambers & Partners in the annual edition of the Chambers Europe Awards. This is the fourth time that Uría Menéndez has received this award (2008, 2010 and 2011). 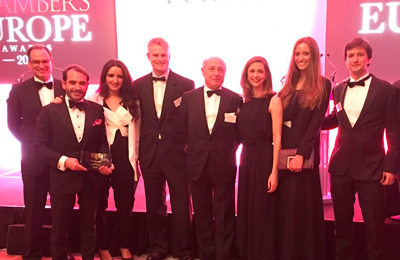 The award ceremony took place in London, and like every year brought together a significant number of European law firms. Receiving the award, Uría Menéndez’s senior partner José María Segovia said that, “2015 has been an extraordinary year for the firm. Thanks to the renewed trust of our clients and to the magnificent work of all those at the firm, we have been incredibly active in many areas, such as M&A, capital markets and finance. This has seen us close a historic year and obtain this important recognition, which fills us with pride”.

In Portugal, Uría Menéndez – Proença de Carvalho is ranked in band 1 in 5 practice areas, including Corporate/M&A for the first time. The other band 1 practice areas are Real Estate, Dispute Resolution, Capital Markets and Public Law. The firm is ranked for a further 8 areas in band 2, and for 2 areas in band 3, making Uría Menéndez – Proença de Carvalho one of the leading firms in the Portuguese legal market.