PPU, in which Uría Menéndez holds a significant share, named Latin American Firm of the Year 2016 by Chambers

PPU received this award and the client service award for Chile in the Chambers Latin America Awards on Friday.

Philippi, Prietocarrizosa, Ferrero DU & Uría (PPU), in which Uría Menéndez holds a significant share, received two awards at the annual Chambers Latin America Awards organised by the British publication Chambers & Partners. PPU was named Latin American Firm of the Year 2016, which was the most important award of the night, and received the client service award for Chile. Its regional presence, global services and excellence were all recognised on the night. 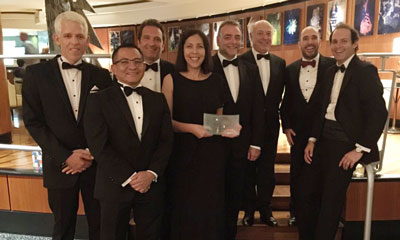 Every year, Chambers & Partners analyses the work of the leading firms in the continent over the past 12 months. This year, it decided to honour the unprecedented PPU project: the creation of the first major Latin American firm following the merger of Philippi from Chile, Prietocarrizosa from Colombia, Estudio Ferrero and Delmar Ugarte Abogados from Peru and Uría Menéndez. The success of the merger was confirmed after just one year, when the firm recorded a 15% growth. PPU is currently the largest firm in the Spanish-speaking countries in Latin America, and is formed by 370 lawyers.

The award ceremony took place in Miami and many leading firms in Latin America attended. José María Segovia, senior partner of Uría Menéndez, attended the ceremony, and said, "it is a great honour for our project in Latin America to be recognised with such a prestigious international award in Latin America. This award confirms the success of PPU, the first major Latin American firm in the region of the Pacific Alliance, and recognises Uría Menéndez’s presence and work there for 20 years."

Uría Menéndez is a leading law firm in the Ibero-American market with 17 offices located in the most important financial centres in Europe, the Americas and Asia. Founded in 1946, it has over 550 lawyers who advise on Spanish, Portuguese and EU law in business-related matters and covers the full spectrum of industry sectors.