This accolade adds to those already obtained by the firm in previous editions, when Uría Menéndez won the Best Firm award in both 2015 and 2017.

Luis de Carlos was honoured yesterday with the award for Best Managing Partner by Forbes magazine in the fourth edition of the Forbes Abogados Awards. This accolade adds to those already obtained by the firm in previous editions, when Uría Menéndez won the Best Firm award in both 2015 and 2017.

The awards ceremony, which the Minister of Justice, Rafael Catalá, attended as guest of honour, took place at the Intercontinental Hotel in Madrid and brought together a significant number of representatives of the Spanish legal sector.

Luis de Carlos has been Managing Partner of Uría Menéndez since November 2005. He joined the firm in 1983 and became a partner in 1991. He was head of the Barcelona office between 1993 and 1995 and was responsible for the firm’s professional practice until he was named Managing Partner. He currently manages and coordinates nearly 600 lawyers and a total of 1,000 staff members, spread over 17 offices in 13 countries. 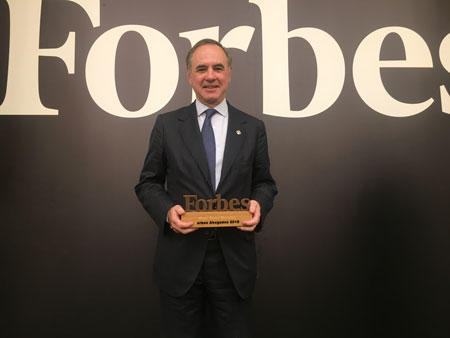 Over these years, Luis has combined management of the firm with professional practice, especially in the area of capital markets law. He also regularly advises on corporate law, corporate governance, M&A and banking law.

The main international directories (Chambers, Legal 500, IFLR, etc.) consider him the leading lawyer in Spain for capital markets work. As such, Chambers Europe named him a Star Individual in this practice area from 2007 (the first edition of the directory) until 2013, when he became an Eminent Practitioner. In addition, in 2016 Luis received the award for “Managing Partner of the Year in Europe” from The Lawyer European Awards.

Luis is General Secretary of the Financial Studies Foundation and was previously a member of the Consultative Working Group of the Corporate Finance Standing Committee (CFSC) of the European Securities & Markets Authority (ESMA). In June 2017 he received the Cross of Honour of the Order of St. Raymond of Peñafort.