Last night Uría Menéndez received six out of the twelve awards in the Third Edition of the Expansión Legal Awards for Excellence in Business Law, which made the firm the leading award winner for the second consecutive year, collecting one more prize than in the last edition.

Luis de Carlos received the only individual prize of the night, the Best Lawyer award, in recognition of his work over the last year during which he has advised on several of the most significant deals, such as the Abertis tender, the IPO of Gestamp and Neinor Homes and the sale of the Pronovias group.

José María Segovia, who received the award for Best Office of the Year, highlighted in his acceptance speech the collective nature of this accolade and stated that this award “is for the firm, for all those who work every day with spirit and endeavour.” 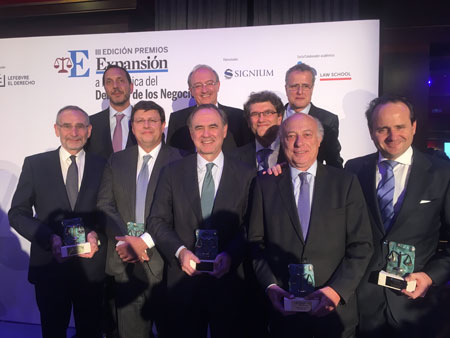 The awards ceremony, organised by Expansión with the technical secretariat of IE Law School, was held at the Teatro Real in Madrid at a crowded event attended by more than two hundred people, including the former Minister of Justice, Rafael Catalá Polo.

The jury, made up of acclaimed experts from the most important firms in the Spanish legal sector as well as from renowned companies and institutions, evaluated the work carried out by the candidate firms in 2017, the number of deals completed and their complexity.