Uría Menéndez, law firm of the year in Spain according to IFLR

Uría Menéndez received the IFLR 2008 European award for Best Law Firm in Spain during 2007 from the prestigious British publication, International Financial Law Review (IFLR) published by Euromoney. This is the fourth time the firm receives such prestigious award. 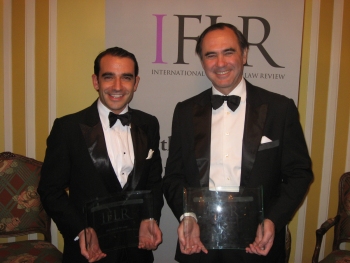 Luis de Carlos, Managing Partner of the firm, collected the award and stated that it represents “international recognition to the work of Uría Menéndez during 2007, year in which we have provided advice in major transactions. We would not have received this award without the  confidence of our clients, who are the main players in these transactions”.

In the Deals of the Year category, Uría Menéndez stood out for being involved in three of the short listed deals, a securitisation deal and two M&A deals. Finally the award for M&A deal of the year went to the takeover of ABN Amro in which Uría Menéndez acted as advisor.

Euromoney publishes a directory on a yearly basis analysing the various practice areas of law firms in Spain; Capital Markets, Restructuring and Insolvency, Project Finance, Banking, Financial Services, Regulatory and M&A (IFLR 1000). Uría Menéndez was the most highly rated firm in its last edition, being considered among one of the most prestigious firms in all areas of practice and being the law firm ranked top the most.