Uría Menéndez signs an agreement with the All China Lawyers Association

The agreement will train Chinese lawyers in Spanish and European law during their stay in the firm’s offices in Europe and Latin America.

The law firm Uría Menéndez has signed an agreement with the All China Lawyers Association (ACLA), the institution to which all Chinese lawyers belong and which is equivalent to the Law Society in the UK.

This is the first agreement that the institution has signed with a foreign law firm. The agreement focuses on a programme for training Chinese lawyers in Spanish and European law by means of secondments in the firm’s offices. 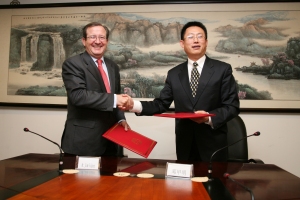 The programme will allow Chinese lawyers to learn about the practice of law in Europe and Latin America during their stay at Uría Menéndez. Among the various activities planned, lawyers will receive an introduction to international business law in the firm’s offices in Spain. The lawyers will subsequently be moved to Brussels where they will attend a course on European law and will be in contact with institutions of the European Union.

This agreement reinforces the relationship between the firm and China, a country in which Uría Menéndez maintains a lawyer in the city of Shanghai. Jie Zhu has been seconded to the offices of the Chinese law firm Jun He Law Offices, one of the most prestigious in that country.