Uría Menéndez, Iberian Law Firm of the Year in M&A

The firm has received this award from Financial Times and Mergermarket for the third year running.

The judging panel takes into account the M&A transactions of each firm over the last 12 months as well as other factors such as the strategic nature of the deals, their complexity, the financing required or their groundbreaking features.

This award consolidates Uría Menéndez’s position among the leading European law firms in the M&A field in a year that has been driven by foreign investments in the Iberian Peninsula and which, without doubt, have reactivated the market. Furthermore, it recognizes the excellent work carried out by the corporate teams of the firm’s offices in Spain and Portugal that have managed to capitalise on their synergies and work on the most significant deals of the last year. 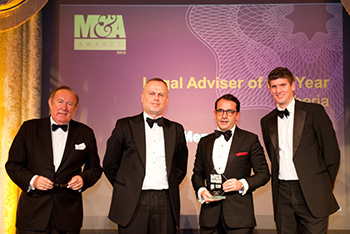