The firm receives the award for the ninth consecutive year. 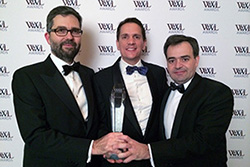 Uría Menéndez has once again been recognised as the 2014 Spain Law Firm of the Year by the British legal directory Who’s Who Legal. The firm has received the award every year since it was established in 2006, now its ninth consecutive year.

The awards are given based on the results of an investigation by researchers of Who’s Who Legal after collecting and evaluating the responses and votes of lawyers, clients and experts from the different sectors analysed. Lawyers from Uría Menéndez received more nominations from clients and fellow professionals than any other law firm in Spain.

For the first time since the awards were established, Who’s Who Legal held a ceremony in New York, which was attended by several members of our local office.