Uría Menéndez, first port of call for the institution that joins the leading Chinese companies investing in Spain, Portugal and Latin America.

On 14 April, Uría Menéndez signed a collaboration agreement with the China Council for the Promotion of International Trade (CCPIT), also known as the “China Chamber of International Commerce”. The agreement sets out the framework within which Uría Menéndez will work with the institution that brings together the vast majority of Chinese companies with interests abroad, and that is responsible for the promotion of Chinese trade and foreign investments. 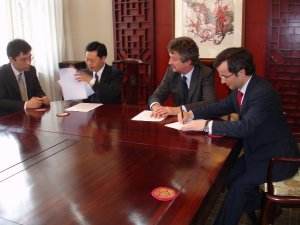 Under the agreement, Uría Menéndez will assist the CCPIT and its associate companies in their investments in the Iberian Peninsula and Latin America. The collaboration will also see the joint organization of training programs for executives with interests in Spain, Portugal and Latin America. An example of this is the seminar that has taken place today in Barcelona on the climate for Chinese investments in Spain and foreign trade. The seminar, focused on the analysis of the commercial relations between the two countries and the investment opportunities they offer, dealt with the regulations applied in the European Union in relation to the safety of Chinese products and international trade barriers. Foment del Treball, Casa Asia, ICEX and representatives from European authorities took part in the seminar.

The CCPIT has its headquarters in Beijing where Uría Menéndez will open an office this summer. The agreement was signed in the Chinese capital by Carlos Viladás, partner responsible for Uría Menéndez’s Chinese Desk, and Juan Martín Perrotto, partner and head of the future Beijing office. After signing the agreement, Juan Martín Perrotto stated that “the agreement with the CCPIT is a milestone of the greatest importance for the development of our practice in China. It will allow us to create an institutional framework for our relations with our Chinese clients and to rely on the support of the largest business organization in China. By making us their first port of call in the Iberian Peninsula and Latin America, we have been honoured with a gesture of trust of which we are especially proud”.