Uría Menéndez has been named Spanish law firm of the year in the 2012 edition of the IFLR European Awards. Every year IFLR holds awards ceremonies in London, New York, Dubai and Hong Kong that recognise the best firms in each country, as well as the most innovative international deals conducted by law firms and in-house legal departments alike.

The awards ceremony took place on Thursday, 22 March, at the Dorchester Hotel in London, and was attended by representatives of numerous law firms and international companies.

Luis de Carlos, Uría Menéndez’s managing partner, stated: “we are delighted to begin 2012 with this award, which specifically recognises innovation in the financial law field and reflects our ability to offer our clients new and effective solutions in what is a particularly complex economic situation.” 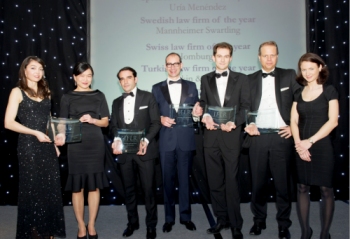