Henar González, Sofía Martins and José Soria among the recipients. 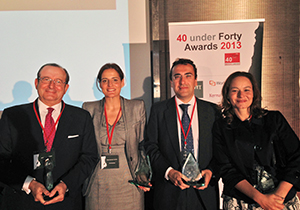 Uría Menéndez also received “The Glenlivet Leadership Award” in recognition of its investment in young talent. Since the first edition of the awards in 2007, 15 lawyers from the firm have been recognised. Uría Menéndez partner Jaime Folguera accepted the award and José María Segovia expressed his appreciation via video from China.