New ICSID Rules, coming into effect on the 1st of July, 2022 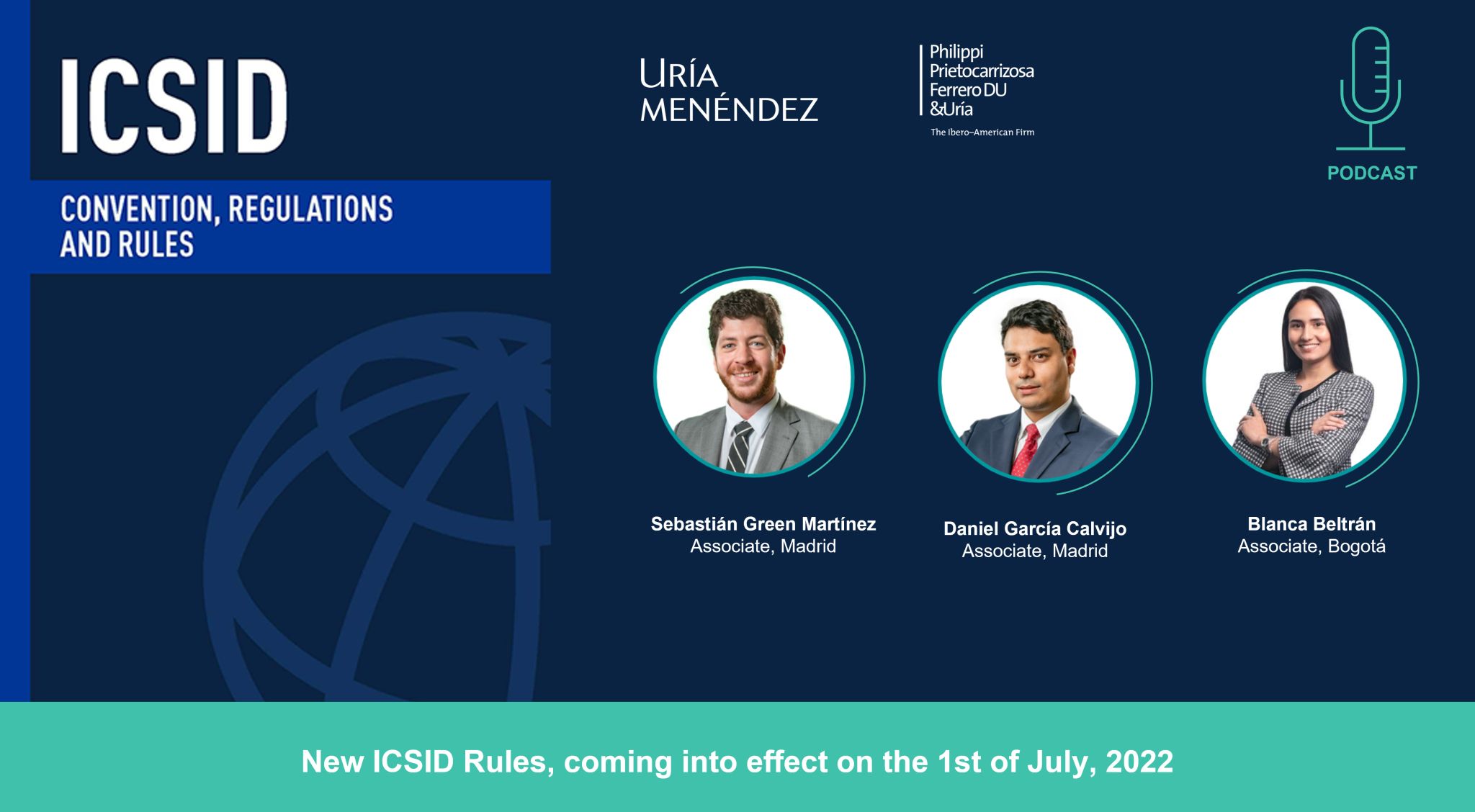 Hello everyone. My name is Sebastián Green Martínez, I am an associate in the Uría Menéndez International Arbitration team and it is a real treat to be here today with my colleagues, Blanca Beltrán from PPU, Bogotá office, and Daniel García Clavijo, from UM Madrid office. We are thrilled to have the opportunity to converse a little bit about significant topics in international investment arbitration.

Today we will be talking about a fascinating issue that has kept international investment lawyers very busy over the past few years: the amendment of the ICSID rules for resolving disputes between foreign investors and their host States. For those of you who are not aware, this is a major event in investor State dispute settlement. The ICSID arbitration rules had actually only been modified or amended four times before this. Anyway, Daniel, what can you tell us about this amendment?

Thank you Sebastian. The current speed – or lack thereof in reality – was one of the biggest concerns during the amendment discussions both at ICSID and UNCITRAL’s Working Group III. One of arbitration’s greatest advantages, compared to litigation before local courts, is that it is faster and thus more cost-effective. However, this hasn’t been the case in reality and recently cases have become more complex and arbitrators busier. According to a King’s College study of 110 published cases, the average duration was between 600 and 1,100 days

Another study published by the Global Arbitration Review and  ICSID’s own study confirmed these findings.

In sum, arbitrations are taking longer and becoming costlier, which may deter some claimants from recurring to arbitration as a means to resolve their disputes with host States. This is also a concern for  these States, as they also have to bear the costs of longer-than-ideal disputes.

So, to tackle this situation the new rules provide two solutions: (i) shorter timeframes for certain procedural milestones, and (ii) expedited proceedings.

This new procedure provides a faster route through which the proceedings must be concluded within 290 days of the constitution of the tribunal and the award must be issued within 120 days of the hearing.

Note that this expedited procedure entails certain conditions, such as the presumption that there will be a single arbitrator. Also, there are no special procedures under Rule 41 for manifest lack of legal merit, no bifurcation, no preliminary objections with a request for bifurcation, and no consolidation or coordination of arbitrations.

Another new feature of these expedited proceedings – and this should be good news for many in the industry – is that memorials are going to be capped at 100 and 200 pages in length!

It will be interesting to see whether – or to what extent – expedited proceedings will be used by parties, as there is no “objective” threshold as to what happened before this was the case in ICC arbitrations. While the timing is attractive, the carve-outs it entails in certain procedural topics may mean that cases of a fairly simple factual and technical background will be able to benefit from this option. However, this is seldom the case in investment arbitrations.

So, now Blanca, could you share with us what innovations this reform brings in regards to security for costs?

Another amendment to the ICSID arbitration rules involves security for costsm, which is a reform that has been pushed by States because they often feel that they are facing unmeritorious claims that would force them to spend thousands in preparing their defense.

In a nutshell, security for costs is a type of provisional measure that would allow a party security to recover the legal costs deriving from the arbitration proceedings. So, the tribunal would order a party to issue a bank guarantee or to make a deposit into an escrow account to protect the counterparty’s right to recover the legal costs incurred during the arbitration.

The previous ICSID arbitration rules did not explicitly regulate security for costs nor the tribunal’s power to grant them. They did, however, grant tribunals the broad power to order provisional measures. So for a tribunal to order security for costs, the requesting party had to meet the general standard for provisional measures that was set in article 53 of the ICSID Arbitration Rules.

When granting security for costs based on article 53, tribunals focused on the conduct of the parties rather than their inability to pay. So if a party could prove that its counterparty had engaged in consistent business practices of avoiding its financial obligations at the expense of its creditors, it was more likely to be awarded security for costs, as was the case in the Eugene Kazmin v. Republic of Latvia procedural order regarding security for costs.

On the other hand, some concerns about security for costs include (i) the possibility that the tribunal may prejudge the merits of the dispute, and (ii) the effects that ordering security for costs may have on a party’s right to access justice, because that party would still have to incur costly legal fees to present its case against a state.

The amendments to the ICSID arbitration rules include the drafting of an entirely new article regarding security for costs, apart from the general standard contained in article 53.

This drafting is, of course, heavily inspired by the development by arbitration tribunals of the requirements for ordering security for costs. However, this also includes a hot issue that we will talk about later: third-party funding.

For some, the mere presence of a third-party funder may indicate that a party could not be able to comply with an adverse decision on costs, because it lacks enough funding alone, and the counterparty – being a stranger to the funding agreement – could not be able to enforce a costs decision against the third-party funder. The new article states that this a circumstance that the tribunal must consider. So, if this is the only argument raised by a party when requesting security for costs, then it could be unsuccessful.

This amendment would require tribunals to analyze security for costs on a case-by-case basis, as it should be. The amended ICSID Arbitration Rules are significantly friendlier to claimants than the proposals in previous working papers, which required tribunals only to consider the party’s ability to comply with an adverse decision on costs.

The amendment will allow tribunals more flexibility to balance the party’s ability and willingness to comply with an adverse decision on costs, as well as the impact on its ability to present its case. The latter could be beneficial to smaller enterprises, which are often more scrutinized as regards their finances than larger companies – which are presumed to be able to pay adverse awards.

Clearer standards are always welcome, as well as express competence for tribunals. The amendments could therefore provide greater confidence to States in terms of their ability to enforce and collect cost orders, which could also lead to greater confidence in the system as a whole.

That’s fascinating, Blanca. Actually, I believe that one of the main goals of this reform was to bring greater confidence to States given that applications for security for costs are growing more common every day – they’re something that we lawyers deal with every day. And it’s the same with third-party funding: I think that third-party funding was bound to be included in these upcoming ISDS arbitral rules. The 2006 ICSID rules, for instance, did not regulate third-party funders in any way and consequently it was common for arbitrators to find themselves in a debate that could not be solved by simply applying the rules or the ICSID Convention itself.

Third-party funders are a sensitive area for State representatives and public officials. As I see it, they might not know who the funder is and, therefore, who might potentially become the creditor of a possible award. Further, they may be deprived of the possibility to object to the third-party funder due to, for example, conflicts of interest of a law firm in intervening in a case or maybe an arbitrator. In the Sehil v Turkmenistan case the tribunal rejected a request by the respondent that the claimants be required to disclose how they were funding the arbitration, but, interestingly, as this case was being decided under the 2006 ICSID rules, the tribunal had no specific regulation on how to deal with this issue. Ultimately the tribunal rejected the request, saying that there was no evidence of conflict of interest due to third-party funding, and no suggestion had been made concerning the disclosure or misuse of confidential information. These types of situation keep public officials and State representatives in the dark about the source of the funding, even though there might be good reasons for public officials and State representatives to request full transparency. A few points come to mind:

In cases like Sehil the Respondent State was prevented from even knowing who the funder was and, thus, was unable to know of potential links between the arbitral tribunal and the funder. In the Teinver v. Argentina case, where I had the honor of representing the Respondent, Argentina had access to the funding agreement. However, the agreement – which was between the funder and certain stockholders of the claimant, was problematically executed by two individuals, who were not claimants – they happened to be stockholders of the claimant. So, in a way, even though they were not party to the funding agreement, they were exercising rights of the claimants. As I see it, under the jurisprudence constante of the ICJ in the Barcelona Traction and Diallo cases, it is well established that shareholders can only exercise their rights as shareholders, and they cannot exercise the rights of the company itself. So that being the case, how could certain shareholders execute the funding agreement on behalf of the claimants? (on this point, take a look at the Teinver v. Argentina award and Kamal Hossain’s dissenting opinion).

Anyway, the new ICSID rules include rule 14, which requires:

This new rule has the potential to bring clarity to an area that sorely needed it. ICSID’s Administrative Council is expressly accepting the viability of third-party funding agreements in ICSID arbitrations, potentially alleviating the concerns of State officials and representatives, as well as providing greater transparency of course.

I’ll wrap up with a couple of thoughts on this: on the one hand, I do not think that this is the end of the reluctance towards third-party funding agreements, as arguments based on public international law can still be made, depending of course on each case. On the other hand, we should not forget that States are free to regulate this issue in their BITs and in their bilateral relationships in general. So now that ICSID has openly accepted third-party funding agreements, States may want to exclude them or regulate them directly in their BITs they enter into from now on.

Unfortunately we have run out of time for today, but this has been a great start to explore what (and how) these new ICSID rules will bring to the arbitral community as a whole. We hope this piece has served as food for thought on these developments. On our side, our Arbitration team will keep you up to date with other highlights of the 2022 arbitration rules during the coming months.

Thank you Sebastián, Blanca and our audience for joining us today. Stay tuned!